One thing is for sure, Major Millions is certainly no spring chicken and this military Major must have seen his share of combat! In fact this progressive jackpot slot game was released all the way back in 2002, making it one of the older Microgaming online slots out there.

This game regularly pays out more than a million to those fortunate winners, with its biggest ever jackpot to date being the €1,945,884 paid out in May of 2017.

The average jackpot win is usually around the half a million mark, so while Major Millions may not trouble the Guinness Book of World Records it has certainly made a large number of jackpot winners very happy indeed. 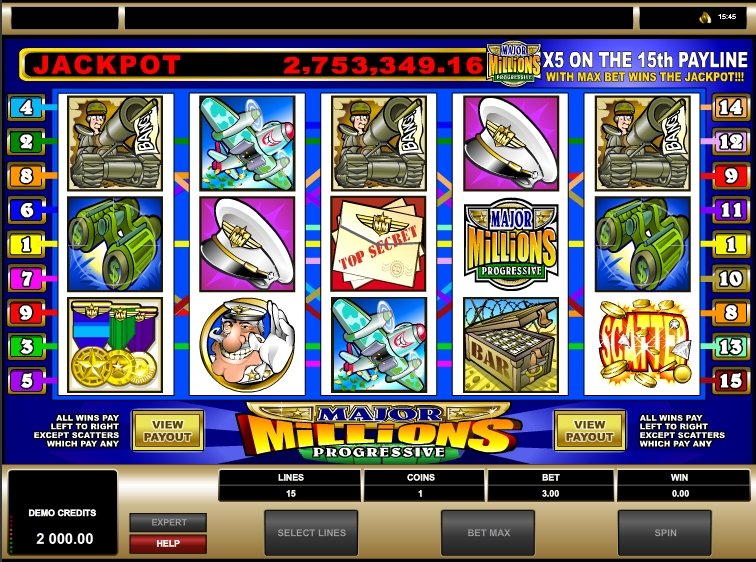 Major Millions is laid out on a 5 x 3 grid with 15 paylines. This is a low variance game which has a (not great) theoretical return to player of just 89.37%.

The Casino Gorilla shook his head sorrowfully upon discovering this news, progressive jackpot or no progressive jackpot. You can bet from between €0.20 up to €3.00 per spin, meaning that this game is probably not going to appeal to high rolling players.

As we mentioned in the intro, this is one of the most venerable of slot games still in active service today. This Major Millions deserves a few more medals on his lapels just for lasting this long in such a competitive industry!

What that does mean is that someone used to modern slots will be taken aback if they come to this slot for the first time. The cartoonish graphics are certainly not impressive when compared to the amazing illustrations and animations we expect from slots today.

The Major is the top value symbol, followed by the military ship, plane and tank. Lower value symbols decrease in value from the top-secret envelope to the medals, sailors cap, treasure chest and finally binoculars.

The Major Millions logo acts as the wild symbol in this game, substituting for any other symbol except for the scatter. As an extra little treat, any win which features that wild symbol will be trebled.

Now it’s just a case of selecting your bet level per spin of between 20 cents and €3 and hit that spin button. Get at least three of the same symbols on a payline from left to right and you pick up a win. Note that there is also a three-reel version of this game, but most casinos offer the 5 reel version these days.

Sadly, this game is so old that it just about pre-dates the idea of special features and bonus games for online slots! As a result you will just have to be content with the basic game, and hope that you manage to trigger that jackpot – which of course is the most special feature about the Major Millions game.

Although there are scatter symbols in use here, they do not unlock a bonus game. Instead, when you pick up three or more of these anywhere on the reels you will win a cash prize.

When it boils down to it, this military-themed slot game is all about one symbol: the Major Millions himself. Not only does this operate as the wild symbol with that triple-win affect but is also the key to releasing the biggest pay-outs.

Find five of these guys in a row on a payline and you will earn a pretty major 8,000 times your bet, which could be as much as €24,000 if you are max betting. And that leads us on to the progressive jackpot…

If you are lucky enough to discover 5 Major Millions symbols along the 15th pay-line – the one which forms a zig-zag pattern from the bottom left of the reels – then you have hit the jackpot.

Now bear in mind that you must be betting the maximum amount in order to qualify to win the progressive jackpot, and we imagine that it must be a kick in the guts to see those symbols line up only to realise you were not betting enough to qualify!

This jackpot is won on average every 6 weeks so you know that no matter how impossible it sounds, those winning symbols do show up more often than you might expect.

There are a few strikes against the Major Millions game from the start. Those graphics are just pretty amateurish by today’s standards, and the Casino Gorilla’s eyes started watering after 15 minutes of looking at them.

There is no bonus game to break up the standard game-play, although the wild symbol factor does make things a little more interesting. At the end of the day, if you are playing Major Millions then it’s a pretty sure thing you will be max betting and chasing that jackpot.

There is no messing about with jackpot mini-games or wheels of fortune – just find those Major symbols in the right place and you will be the latest to benefit from a Major Millions windfall.

I’m still looking to become a millionaire, so I spin away on Major Millions. It is a fun filled game with some nice added features. Only downfall is that is costs a bit more to play than other slots.

This game is not for people who do not want to spend a lot of money. You need to spend a good amount of money to earn here, the minimum betting is £1 each line which was a bit too much for me and I couldn't continue the streak for too long. Other than this the actual gameplay is very fun.

If you don’t like classics then you should probably give it a pass. But if you do like classic, be sure to check this out. It’s one of oldest slots out there. The betting amounts are not that high compared to new slots, but that doesn’t matter to me.

If you want the chance to win one of the biggest jackpot payouts, try Mega Millions. This is the flagship progressive from Microgaming and it is very easy to play. IT is an older game, so you won’t find the enhanced graphics as with newer slots, but the payouts have been incredible. I haven’t won a progressive, but I have had a few times wining over a thousand from one spin. I like the game and am hoping to be a jackpot winner someday.