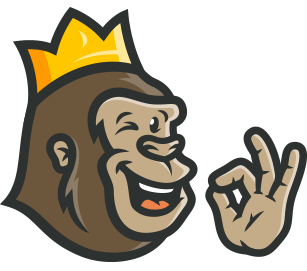 In fact with a jackpot pay-out of €17,861,800 to a Finnish player in 2013 was less than €20,000 behind that record set by its rival from Microgaming. Mega Fortune is NetEnt’s flag-bearer in the battle of the big beasts, and it consistently pays out major sums of money.

The Casino Gorilla is a long-standing fan of NetEnt and he is pretty fond of cash too, so it sounds like a winning combo. 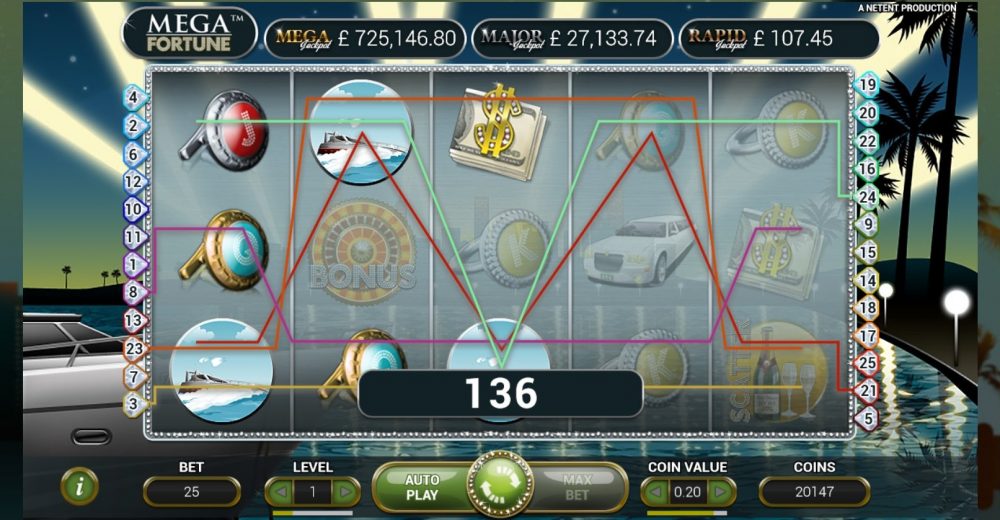 Mega Fortune is a 5-reel slot game with 25 paying lines. Minimum bets start at 25c/p and go all the way up to €/£/$50. One point worth mentioning is that the Finnish jackpot winner who nabbed that massive windfall was only betting 25c a spin at the time, which shows that those big wins are possible with a minimum investment.

The theoretical return to player for this game is 96.6% which is a major plus point when compared with that other Mega slot from Microgaming. Like Mega Moolah this is no spring chicken of a game, having been around since 2009, but it still seems to be as popular as when it was first released.

Mega Fortune is all about money, and it’s not ashamed to flaunt it. That’s why the reels are covered with symbols signifying wealth and opulence. You get jewellery, stretch limo, brandy and cigar, a money clip wadded with dollar bills and a sparkling golden watch.

If you tire of brandy then the scatter symbol is an equally glamorous champagne bottle and glasses, while the wild is a bright red speedboat which crests the waves. In other words, it basically describes an average Saturday night for the Casino Gorilla!

Choose your bet size to get started, and with such a vast difference between the max and min bets make sure you choose the one that suits you. Now you are ready to start spinning, with an autoplay option available if you plan to be here for a while.

The limo is the highest value symbol in the base game, and only two of these on a pay-line from left to right are enough to win a small prize. For the other symbols you will need at least three in a row, one or more of which can be that wild speedboat symbol.

As you might imagine when it comes to a game which has got a few miles on the clock, the audio and visuals are not exceptional but that can be overlooked when those massive jackpots keep ticking upwards.

The scatter symbol of champagne bottle and glasses are what you need to see in order to unlock the free spin bonus game. Three or more of these anywhere on the reels gives you free spins, with the number to be determined by choosing one of the three (or more) symbols.

More symbols will mean more spins, and these can be re-triggered if you find at least two scatters within the bonus game. As you use your free spins, your winnings will be multiplied by between 1 and 5 times, meaning that this bonus round can be extremely lucrative.

Of course, if you are talking about the really lucrative element of Mega Fortune, then look no further than the jackpot bonus game. As you may have guessed, it is not going to be easy to unlock this particular game.

It will require you to find three bonus ‘wheel of fortune’ symbols in a line on an active pay-line. There’s no point in hiding it, getting these in a line is going to take a whole lot of patience, but if and when they arrive you are in for a guaranteed win – although maybe not a big jackpot.

For getting three bonus symbols on a payline, you are taken to a new screen where you get to play to try and win one of three jackpots: the rapid, major and mega jackpots.

For the ‘rapid’ you could be talking around 100 bucks, thousands for the major jackpot and into the millions for the mega jackpot. The bonus screen shows three interlocking wheels of fortune.

You are trying to land on arrow symbols to get closer to the centre of the wheels, which is where the mega jackpot is. As you move through the wheels, there are less arrow and more cash symbols, and if you hit on the latter you stop and take home that amount. You will definitely win something on the bonus wheel, but exactly how much remains to be seen.

As with any online slot game which has been going for around a decade, it will suffer by comparison to the latest top-line slots – at least when it comes to the visuals.

That being said, Starburst is pretty long in the tooth and regularly tops the lists of the most popular slot games in the world even today.

The basic gameplay of Mega Fortune is entertaining enough in its own right, especially when you know that a rewarding free spin round could be coming your way at any time.

The graphics still look reasonably decent, and then when you add in that potential mega jackpot, well, that lifts this game up to a whole other level. It may not be as fresh as it once was, but Mega Fortune will stay popular for as long as it’s offering multi-million jackpots on the spin of those reels.

If you want to win big, play this game. I am still waiting to be a progressive winner, but overall, I have done quite well with this title. It is enjoyable to play and I can alter my bet amounts.

I am playing this game with the hopes of winning big someday, as someone has won in 2012. No luck on the jackpot but I have won multiple casual games on this slot. I love the free spins feature which you can get by collecting three champagne bottles. It really makes the game interesting.

The only slot out there to see Mega Moolah in the eyes. NetEnt has been trying to surpass Microgaming for years in a progressive jackpot and Mega Fortune is their best shot till date. I for one will keep trying until I win something life-changing.

Mega Fortune is your best bet if you want your chance to win millions. O have been playing this slot since it came out and even though I have not won a jackpot, I have enjoyed many payouts. The game is a good choice if you have limited funds. The bet amount will not reduce the jackpot payout, so you can win on any spin no matter how much is bet. I love NetEnt games and tis slot is one that I have returned to many times.